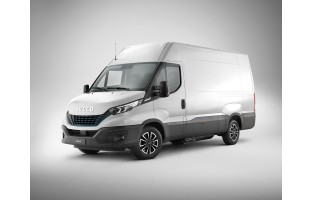 Buy Iveco car mats and enjoy the best value for money. At the Car Mat King, you will be able to find all the qualities and finishes available on the market. From an economical mat for an Iveco to the excellence range which is manufactured from the best materials of velour and rubber. You will be able to place your order easily and receive it at your home in 24 hours. Trust the best, without any surprises! Kit out your Iveco and give it a new look. Discover everything we have for you.

Iveco History: The Italian industrial group Iveco designs, builds and markets light, medium and heavy commercial vehicles, quarry and construction vehicles, urban and intercity buses, and special vehicles for applications such as firefighting, cross-country missions, military and civil defense.
The brand was created by Fiat in 1975 after merging Italian, French and German brands: Fiat Veicoli Industriali (located in Turin), OM (Brescia), Lancia Veicoli Speciali (Bolzano), Unic (Trappes) and Magirus (Ulm). It should be noted that in its early years the brand was mainly focused on its rationalization, but integrating and perfecting the production processes that until now had functioned autonomously and its sales network, but maintaining the original brands. From its inception in 1975 to 1979 the Iveco range had 200 basic models and 600 versions of them.
It was in 1978 when he launched his first light vehicle, the Daily 6, with the Iveco brand. This vehicle was originally created as a small industry vehicle, with a remarkably solid structure.
Two years later, in 1980, Iveco built the first turbo diesel engine for heavy commercial vehicles, launching the TurboDaily, Turbostar and Turbotech models, which were primarily intended for heavy transport. The launch of these vehicles provided the brand with great success.
Another successful launch of the brand was in 1984, with the TurboStar, a heavy road vehicle. Thanks to this launch they were successfully positioned in sales level, managing to become the TurboStar in a great protagonist of the European market.
A year later, the Iveco brand manufactured the first light diesel engine with direct injection. But it was in 1989 when they manufactured the first diesel engine with EGR in order to reduce polluting emissions. This engine was compatible with commercial vehicles and that same year the Daily that mounted that engine was launched.
In 1990 the company was forced to give the brand a reorganization because it went into crisis due to the progress of the competition. Iveco decided to participate in the markets of European countries, thus expanding its number of industrial plants, all of them in Spain. EuroCargo, EuroTech, EuroTrakker and EuroStar were the vehicles that represented a total renewal of the range, which even came to be called " Truck of the Year”.
This led to further expansion, and in 1991 it acquired the English company Seddon Atkinson, with which it brought its extensive experience in special vehicles for the construction and waste collection sector.
They continued to innovate and in 2000 the Daily model won the "International Van of the Year" award, which was given to the brand again in 2005. In 2003 its heavy-duty vehicle, the Iveco Stralis, was awarded"Truck of the Year". That same year, Iveco acquired all of Irisbus.
In 2004 the brand Iveco Motors was created, which became the parent company for the production of the engines.
As a well-known and relevant fact of the brand of the year 2006, is that in that year Iveco sponsored the Olympic Games in Turin with a fleet of 1,200 Iveco Irisbus buses, being the sponsor of the New Zealand rugby team, the All Blacks. 3 years later, in 2009, Iveco became the most outstanding supplier of trucks and commercial vehicles for the Moto GP, in addition to continuing its sponsor for the Ferrari Racing team, to which it provides the vehicles to transport the single-seaters of the Formula 1 World Championship races. Iveco won the 33rd in 2012.th edition of the Dakar rally
Iveco's production plants are located throughout Europe, China, Australia, Russia, Argentina, Brazil and Africa, with more than 5,000 points of sale and providing assistance to more than 160 countries. The global production of the Iveco company amounts to about 150,000 commercial vehicles of all types.

Buy Iveco car mats and enjoy the best value for money. At the Car Mat King, you will be able to find all the qualities and finishes available on the market. From an economical mat for an Iveco to the excellence range which is manufactured from the best materials of velour and rubber. You will be...

At Car Mat King, you will find various qualities and personalisations of car mats for Iveco. Below we will explain the different types: